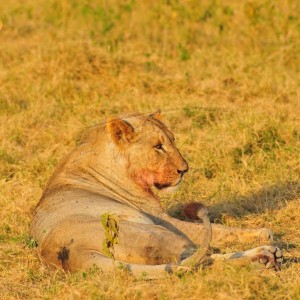 Enjoy a 10 day holiday, exploring different landscapes that make up Kenya’s grand wildlife safari holiday destinations. Tour the savannah plains and swamps of Meru National Park, which is the land of the famous Elsa, a lioness raised by the conservationist couple George and Joy Adamson, and brought to the limelight in the movie Born Free. Enjoy picturesque view of Mount Kenya, watch the meandering Tana River and the Adamson’s Falls through daily excursions of Meru National Park.

Drive further North into the open plains of Samburu, which spark the desire to explore the rich plains and riverine vegetation along the Ewaso Nyiro. Do all this and more exciting adventures during your trip to Shaba Game Reserve.

Culminate this wildlife safari with a trip to the world famous Maasai Mara National Park, where you will enjoy three days of uninterrupted game viewing in the grassland.

Stay in lavish lodges during this grand wildlife safari holiday. Each destination, from Meru to Samburu and Maasai Mara has an excellent lodge waiting to take you in, pamper you, give you utmost privacy, succulent meals and access to attractions in the neighbourhood.

Arrive at the Jomo Kenyatta International Airport (JKIA). Our ground representative will welcome you and make arrangements for the road transfer to Giraffe Manor, just 40 minutes from JKIA. Pull in at this luxurious hotel for full board accommodation on the first day of the grand wildlife safari holiday. Giraffe Manor is over eight decades old, with rich architectural design, intimate hospitality and great meals. Enjoy succulent meals in the dining room and get some rest, en-suite.

Giraffe Manor is adjacent to the African Fund for Endangered Wildlife ( AFEW), which is a sanctuary and breeding centre for Rothschild Giraffes. In addition to giraffes, this historic house has numerous birds, warthogs and bush bucks within its expansive land.

Wake up to a hearty breakfast at Giraffe Manor, in a spacious dining room with wall to wall glass windows. Watch out for giraffes that pop their necks into the dining room and scoop everything with their prehensile tongues. It is a true definition of living wild because Giraffe Manor is the only place where you can get close to giraffes.

You barely notice this lodge because it camouflages in the beautiful cliffs jutting out of a hill close to the first campsite George Adamson built when he lived here. Elsa Kopje Camp is a magical place. It is paradise. Each cottage features a beautiful view of the plains with rolling hills and Mount Kenya forming a breathtaking backdrop that you must capture on film.

The private house has two bedrooms, a spacious bathroom with an outdoor shower, and a swimming pool on the edge of a cliff with the sprawling hills dotted by numerous trees. With three days at your disposal, go for game drives, nature walks, sundowners, bush dining, river excursions and fishing expeditions. Animals to see in this national park include elephants, hippos, lions, cheetahs, leopards, and antelopes among others.

Alternatively, relax indoors for a massage. Elsa Kopje is an award winning lodge with exquisite meals, luxurious accommodation and serene surroundings. The chefs treat you to delicious meals daily, for the three days you spend here.

Enjoy a sumptuous breakfast at Elsa Kopje Lodge and say goodbye to Meru, en-route to Samburu. Drive through Meru National Park to the airstrip for a 25 minutes flight to Samburu Airstrip. Arrive in Samburu at 11:00am and hop onto the road transfer vehicle to Joy’s Camp, within Shaba National Reserve. Drive through the open plains of this reserve along a dirt trail with animal traffic every so often as elephants and other animals migrate to greener sections of the park.

This 10 tents lodge overlooks a natural spring that lures elephants, Grevy’s zebras, lions and the Beisa Oryx love from the plains of the reserve.  The tents exude rich African decor, which is visible even in the attire worn by the staff. What better way to usher you into Africa than with a game drive through the flat plains of the reserve to the rocky shores of Ewaso Nyiro.

Dine in the bush overlooking the river, enjoy a sundowner drink on the rocks with the plains rolling out like a carpet from under the rocks. Two days of fun and adventure await you at Joy’s Camp.

Depart for Maasai Mara National Reserve after breakfast at Joy’s Camp. Board a road transfer vehicle to Shaba Game Reserve airstrip for the 9:20am trip to Keekorok Airstrip in Maasai Mara. Drive to Cottar’s 1920 Camp, a luxurious lodge that will take care of you for three days. Cottar’s 1920 Camp is the home of lavish living in the wild. It is a serene spot in a private conservancy close to the border of Maasai Mara and Serengeti National Park in Tanzania.

This lodge takes you back to a time when a wildlife safari was about romance, tranquility, luxury and excellent hospitality. Cottar’s 1920 lets you live in a spacious tent with a breathtaking view of the plains. It is a family friendly lounge with a family tent and a honeymoon suite especially tailored for couples.

Go for nature walks in the plains or embark on game drives to see elephants, wildebeests, giraffes, lions, leopards, cheetahs and hyenas among others. Maasai Mara is home to over 500 species of birds so a birding tour is a must-attempt-activity.

Start your last day at Maasai Mara with a game drive through the plains. Depart from Cottar’s 1920 Camp at 8:30am headed for Keekorok airstrip for the 11.00am flight to Wilson Airport in Nairobi. Arrive in Nairobi at about 12.15pm and head to Giraffe Manor Hotel for a day room to relax until it’s time for your flight when you will be transferred to the airport (JKIA) for your departure flight back home.

There are no reviews yet.